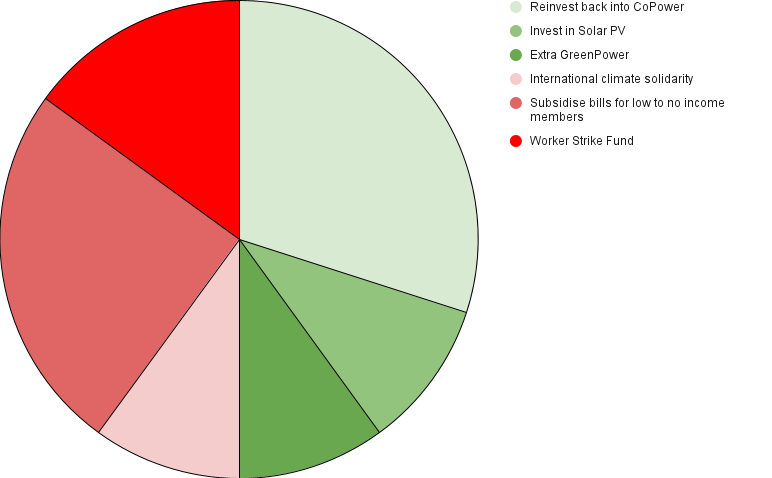 CoPower is in an exciting phase. Thanks to you and every CoPower member, CoPower has run its first Participatory Budget. And what a success story it is!

We ended up putting 50% of our electricity revenue to building up new energy infrastructure, and 50% of our revenue to social solidarity measures. You can find an in-depth summary of all the projects, including the successful ones here.

We also had three successful pitches that go to building social solidarity:

here is no single model for a participatory budget because, as the name suggests, it’s a participatory process. Members design the model to suit the co-operative, its values, needs and interests.

How we got to the end result

There is no single model for a participatory budget because, as the name suggests, it’s a participatory process. Members design the model to suit the co-operative, its values, needs and interests. So how did we do it?

We held two customer member forums that allowed members to both have a chat and ask questions about the various project pitches we received from an open call out and to shape how we should run the voting process. The end result of these forums was that each customer member was invited to vote via Google Forms over a 14-day period from 13 to 27 September 2021.

The voting was done on a proportional basis with the following requirements:

Proposals were ultimately supported on a proportional basis unless:

To ensure every customer member had the opportunity to have a meaningful say, we also decided that if a  customer member’s entire vote is taken up by Proposals that do not meet Proposal Thresholds that person is given an additional 48 hours to re-allocate their vote.

Finally, we knew that if CoPower continues to grow then the democratic mandate for the budgetary period would shift. So together, we decided that f CoPower’s electricity revenue exceeds $20,000 for the 2021/2022 voting period, then another customer member forum must be called to discuss and determine how to allocate the additional revenues.

It’s that easy! And best of all, participatory budgeting is open to change because the members in forum design the model.

Cooperative ways of working are not only efficient but effective. Everyone can have a say!